From Winter's Tale to Fairy Tale

Not only do literary critics misunderstand the Christian elements in Shakespeare - directors and actors do, too - by Kevin O'Brien

From Winter's Tale to Fairy Tale 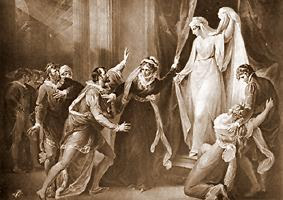 (Above: King Leontes at what he believes to be the statue of his dead wife, overwhelmed at the resemblance.)

It is generally a good idea for a drama critic to see a play before he critiques it.

However, I'm going to be bold enough to say a few things about a play I didn't see. Why? Read on.

Last Sunday I had planned to go see a production of Shakespeare's The Winter's Tale produced by a small semi-professional theater company in St. Louis.

Let me begin by clarifying what I mean by "semi pro".

In show biz, we seem to have three types of companies that produce live theater outside of high school or college settings:

COMMUNITY THEATER, or groups of amateurs who don't get paid and who do shows either for the fun of it, or to hook up with folks other than their spouses. Their audiences are friends and family and members of the community and they usually rehearse every night for six weeks;

SEMI-PRO THEATER, or groups of actors who have more talent and experience than community theater folk, and who get paid, but whose pay amounts to perhaps $30 for a three weekend run (nine performances) of a show. I am not making this up. This is what most semi-pro companies pay their actors. Their audiences are friends and family almost exclusively, drawing hardly at all from the community in which they are located, and the troupe usually rehearses about half as much as a community troupe; and

PROFESSIONAL THEATER, or groups of actors who may or may not belong to the union, but whose non-union members get paid at least $100 per performance, whose audiences are general theater-goers, with no significant percentage of them being family and friends, the demands of production often requiring rehearsal time of as little as two weeks.

Now, the company that produced the show in question, The Winter's Tale, is the only other troupe in St. Louis that I know of that claims to be "faith based", but I am told they are rather vague about which faith upon which they are based. I am told (albeit third-hand) that this troupe is actively seeking Hindu and Muslim scripts. After all, we're called to "believe", and we all believe that "believe" is an intransitive verb, don't we?

Anyway, I was a tad curious about this production because my friend Tom Leith of Credo of the Catholic Laity had arranged a discussion afterwards led by a local professor on the topic "What are the Catholic Elements in The Winter's Tale?" Tom reports that the discussion went well, and that the professor, who is quite familiar with the scholarship of Joseph Pearce, is convinced that Shakespeare was in fact a Catholic and sees the obvious Catholic elements in this play, of which there are many. That's good to hear.

What is not good to hear is that the production was botched - at least in one crucial area. Again, I didn't see it, and I can not speak on the acting, the costuming, the direction, the overall production - but I can speak on this.

Somebody along the way decided to bring Mamillus back to life.

To know how wrong - and how anti-Christian and frankly anti-literary this choice is - you must understand at least the general outline of the plot. King Leontes gets a wild notion that his wife is cheating on him. His rage leads to the death of his little son, Mamillus (from stress and a wasting away over the uproar about his mother), and his rage leads also to what the king believes is the death of his wife. Leontes is pretty well raving mad, beyond even Othello, until he learns that the Divine Oracle has revealed him to be in error. Knowing that his jealousy and madness had led to the death of his son and to what he thinks is the death of his wife, Leontes embarks upon sixteen years of heartfelt penance. At the end of the play, we all learn that the queen is not dead, that she has in fact been hidden away all this time, and in a striking scene where she poses as a statue that comes to life (although older than when the king accused her and with wrinkles), she is restored to Leontes, who is fully sorry for his sin, and overcome with joy at this apparent resurrection.

But the boy remains dead.

And the queen has wrinkles.

This is because sin has consequences.

Our faith is not a fairy tale. Christ died a bloody and horrible death because of our sin. When Catholics receive absolution in the confessional, they are still required to perform penance because sin is real and has consequences, even when forgiven. The Resurrection has won us new life, but our old life - including our concupiscence and the effects of our former sins - still remains. Indeed, the Risen Christ still carried his wounds. He carries them to this day, in Heaven.

To insert a stage direction or bit of business like bringing Mamillus back to life in Act Five so that Leontes gets to go right back to one big happy family serves no good purpose. It subverts the intention of Shakespeare, undoes one of the main points of the play, and frankly confuses the audience. With no dialogue indicating that Mamillus has been squirrelled away with his mother, the audience is left wondering why he comes out - now fully grown - and embraces his daddy beside the newly restored living "statue" of his mother. At least one audience member told me as much.

Now I'm sure the production wasn't all bad. But this is a serious error and tells us - even those of us who didn't see the play - that the director (or whoever made this choice) just didn't get it.


God bless them all for trying, but I'm kind of glad I went to the Three Stooges movie instead.