As the Globe Turns

A pastiche of Shakespeare for high school students - by Kevin O'Brien

As the Globe Turns 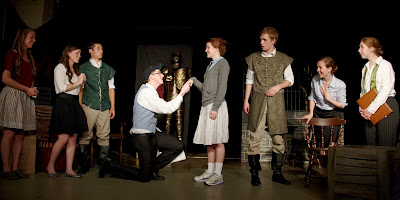 Chesterton Academy in Minneapolis recently produced my play As the Globe Turns, a comedy about a traveling troupe of Shakespearian actors.

This script of mine, along with many other scripts by many other playwrights, will be featured later this summer on Miracle Plays, a website devoted to offering scripts for school groups, amateur groups and professional theaters - all of which will be written from a Christian perspective.

More on Miracle Plays when the site premiers!

Meanwhile, it sounds like As the Globe Turns was a big hit.  For more on Chesterton Academy, the best high school in America, click here.