The Rhetoric of Shakespeare

The plays of Shakespeare, like the Christian Faith, are about more than just feelings - by Kevin O'Brien

The Rhetoric of Shakespeare

an abridgment of an article published elsewhere

... I've been writing about the tendency in acting circles to say it's all about emotion and not about what contains or directs the emotion; indeed it's all about feelings and not about purpose.  This fashion becomes a disdain for technique or even discipline, which stems from the modern notion that content can exist without form or that anything that constrains or holds us back or shapes us is suspect. 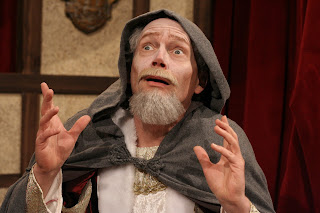 And when it comes to Shakespeare you really see this in spades.  As the photo here proves I have personal experience acting Shakespeare poorly.  I've also had enough experience directing Shakespeare to know that actors approach the Bard the way they approach all acting - gin up those feelings, baby.  Emote!  Emote!  If you don't feel it, it ain't real!  Thus an actor can do a very emotional performance of a Shakespearian speech without realizing at all that there's a point to this speech and a direction for this emotion.

Shakespeare's characters do more than spout dialogue and gush sentiment - they use rhetoric.  Most of the speeches in all of the plays are rhetorical, by which I mean intellectual and emotional arguments a particular character presents to build a rational case for who he is and what he is doing.  There's a ton of philosophy in Shakespeare, coming at us from as many points of view as there are personae in the dramatis.  And one of the points of the drama is to see how the consequences of these conflicting philosophies play themselves out.

But not only do many actors overlook the rhetorical shape of the speeches they perform, they think it's wrong for anyone to suggest that these speeches - or this character - or the play that contains them - means anything other than the (usually narrow and self-serving) meaning they impose upon all of it arbitrarily and ahead of time - which is how they look at life:  disconnected fragmentary bits of emotion and experience without a point to any of it beyond whatever subjective point a person may choose to impose as the mood strikes him.